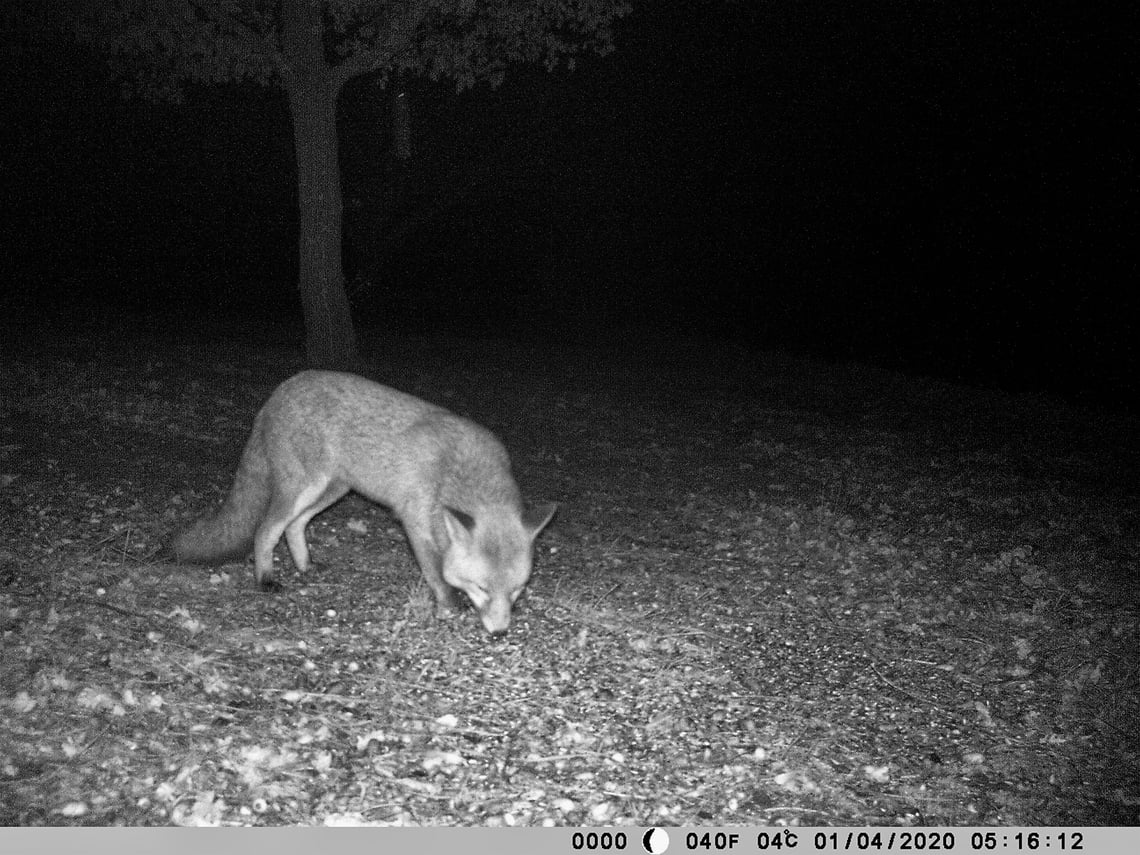 Backyard Sleuthing: Tips on Choosing a Wildlife Camera for your Rural Land

Wildlife cameras, also known as "trail cams", are an excellent tool to help you learn more about the wildlife that share your rural land. Whether you're considering one to help safeguard your chickens from predators, to improve your hunting or for pure entertainment Jim Mize shares his experience and tips on choosing the best trail cam.

My cabin sits on the edge of a wilderness area on one side and a state park on the other. In between, my house and a smattering of others are the only developed property. As a result, we’re often on the path of travel for a number of nature’s critters.

After a bear made a few visits while I slept, I decided to see what other creatures were slipping through while I wasn’t looking.

With a little research and a surprisingly small amount of money, I bought two trail cameras and began to monitor my property.  You might be in a similar situation, so I’ll share what worked for me.

What To Consider In a Wildlife Camera 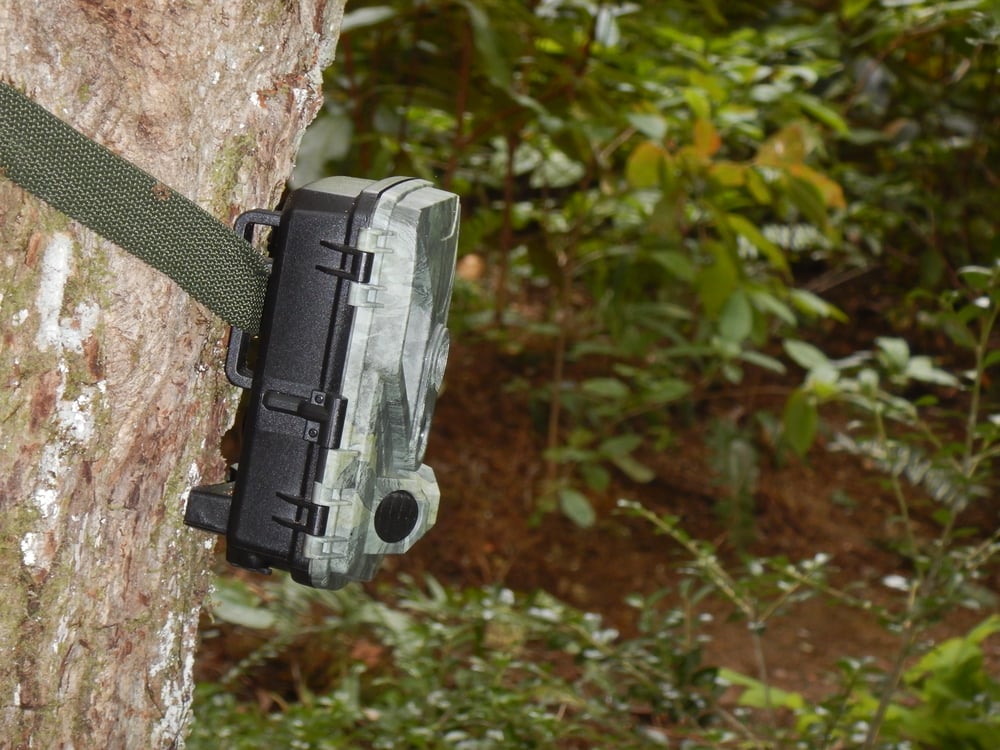 Hunters have been using these cameras for some time now and manufacturers have responded with features and models well suited to them.

For instance, I wanted to select a camera that didn’t scare the wildlife when I took a photo in the dark. Manufacturers offer several types of flash and lighting, one being infrared which animals don’t see.

Most of the cameras I looked at were waterproof, a must for outdoors.

Since hunters were a key part of the market, the cameras were usually camouflage and not intrusive.

These cameras also usually came with straps and as an option, locking cables. These would be useful if part of what you were watching might be humans that could steal your camera.

Downloading the photos is simple enough. I just plug one end of the cable into my computer through the USB port and the other to the camera. This allows me to view all the images on a larger screen.

Last, my cameras also have the option of recording video or photos. This was more useful than I thought. Videos tell me more about the activities of the wildlife while in front of the camera. The photos help me identify what is passing through and use less memory.

How To Place Your Wildlife Camera

Once I put the cameras up and began to monitor the images, I learned a lot about placement.

For starters, the height of the camera determines what you record, so think about that when you strap them on a tree.

For instance, I have captured many images of deer feeding through my property on a camera set at chest-height.  Yet other animals avoided the open areas and were not seen until I put one in cover at ground level. Then, I began to record raccoons, possums, chipmunks, ground-feeding birds, and one bobcat. Many of these animals kept to cover and were invisible to a camera above the undergrowth. 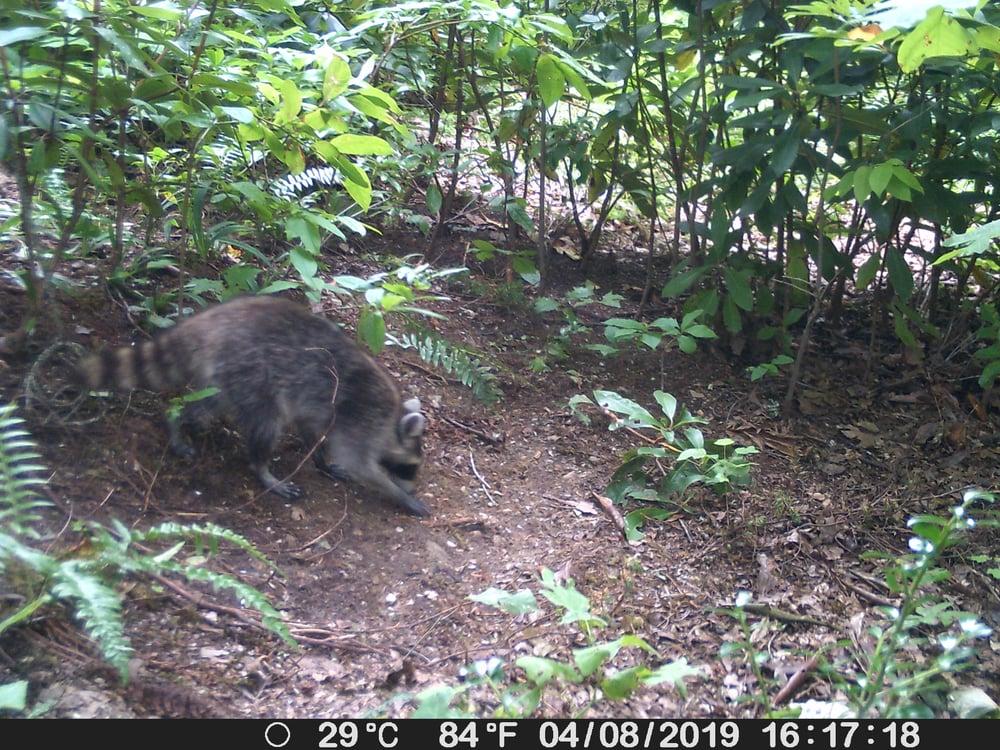 Most of the internet stories emphasize the importance of not pointing the camera east or west as the direct sunlight will make the image too bright. My property is heavily wooded and this has not been a problem, though I noticed the best views I have are looking north anyway.

So after a few weeks of sleuthing with my Trail cameras, what have I learned?

For starters, I have a variety of animals and most of them are nocturnal. Even though I have seen deer and raccoons during the daylight, they visit even more frequently after dark. This is especially true of raccoons, possums, bobcats, and coyotes.

Also, where these animals travel differs.

The deer and coyotes linger in the openings, but many of the animals stay under the cover of rhododendrons and mountain laurels. The bear kept to the trail and lumbered along at his own pace.

The repeating photos and video also tell me which animals are passing through and which ones are scavenging in my vicinity. The deer, for example, browse on the lower growth. The raccoons look for birdseed that may have fallen from above.  The bobcat and coyote moved through at a steady clip.

After a few weeks, I’ve also learned that I don’t need to download photos too frequently.

The camera watching the trail takes about twenty-five images a week. The camera on the ground captures about a hundred and many of these are birds and chipmunks. I just download all of them to my computer and delete the ones that have become routine.

To sum it up, I’ve unraveled what had been a mystery to me, namely, what’s going on in my woods while I sleep.

A little backyard sleuthing can be educational and entertaining.