From Dallas to Prosper: Trading the city for rural life

Posted by Jennifer Frazier on January 2, 2016

When Dallas Sports FM Radio 105.3 The Fan Host Ben Rogers approached his wife Kat about leaving Dallas and moving to the country, she thought he was crazy.

But he convinced her to at least visit some rural areas and after some looking around, she agreed, the benefits outweighed the downfalls (by a lot!). So, they packed their home and moved, along with kids Max (age 10), Miles (age 8) and Grace (age 4), trading the big city life for rural living. The decision wasn’t easy, but they are thrilled with their new country dwellings. Here’s what they had to say when we chatted with them.

RR: You recently packed up your home and life in Dallas and relocated to Prosper, Texas. What made you “rethink rural”?

A: We wanted to give our children more freedom and independence.  Living in the city, we didn’t feel comfortable letting them ride their bikes down the street, much less all around the neighborhood.  We feel like our new Prosper neighborhood is much safer than Dallas.  Nearly every house has kids so everyone is outside playing after school and roaming the neighborhood.  All the parents look out for all the kids.  It’s very refreshing. 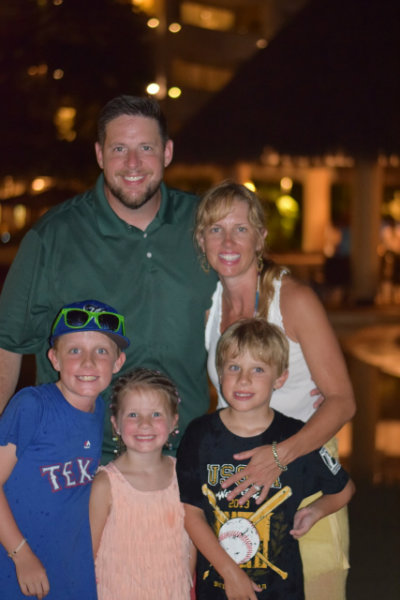 RR: The move was Ben’s idea.  Were you immediately interested in leaving the city, Kat?

A: He thought about moving and mentioned it to me for probably a year or more.  When the house values started going up and selling so quickly, he got more serious about us checking it out.  That's when I "caved."  We researched and looked at houses for probably 2 months before pulling the trigger.  No regrets, at all!

RR: Do you miss the big city? Completely happy with your new country life?

A: The only thing we miss about the big city is the convenience of everything.

RR: What do your 3 children think about moving and their new life in the country?

A: They love it.  They play outside much more, and LOVE the freedom to go and roam around.  They also LOVE that there’s kids to play with all the time.

Your husband is an on-air personality for a Dallas sports radio station. How has the move affected his job and professional lifestyle?

He puts more miles on his car, but fortunately his commute isn’t during normal rush hour, so while it’s a longer distance, he’s not in traffic.

RR: What is it about rural living that made you pack up your family and move to the country?

A: It started with more house for the money, but after researching it and actually being here, it’s just such a cool feeling to live in a smaller town.  It’s all about family here and when you’re 40-something with three kids, your priorities change.  It’s safe and comforting.  And having a newer, bigger house is pretty cool too!

RR: What does rural living offer that city life doesn't?

A: It’s slower.  It’s about family.  It’s peaceful.  And there’s a huge sense of school spirit and pride at every level (elementary, middle and high school).

RR: What's the biggest misconception of living rurally? In other words, when you told people you were leaving the city life and moving, what did they expect, versus the reality of what you are living?

A: The first thing out of everyone’s mouth was “the drive.”  They also mentioned missing the diversity and our kids not being exposed to diversity. We do deal with “the drive,” meaning when we have or want to visit the city, but it’s worth it.  Seeing our kids take off on their bikes and now dirt bike scooters is so fun.  And, there’s actually more diversity than I thought there would be, so we’re not missing out on anything.

Are you ready to make the leap from city life to country life? View rural land for sale throughout the South in Texas, Florida and Georgia on our parent company's website, RaydientPlaces.com.

END_OF_DOCUMENT_TOKEN_TO_BE_REPLACED

Meet Lisa Marin---A Model of Self-Sufficiency Posted by L. Woodrow Ross We often hear words, but we don’t really listen. I am often guilty of not being a good listener. My wife, Margaret, had often mentioned the Facebook...
END_OF_DOCUMENT_TOKEN_TO_BE_REPLACED