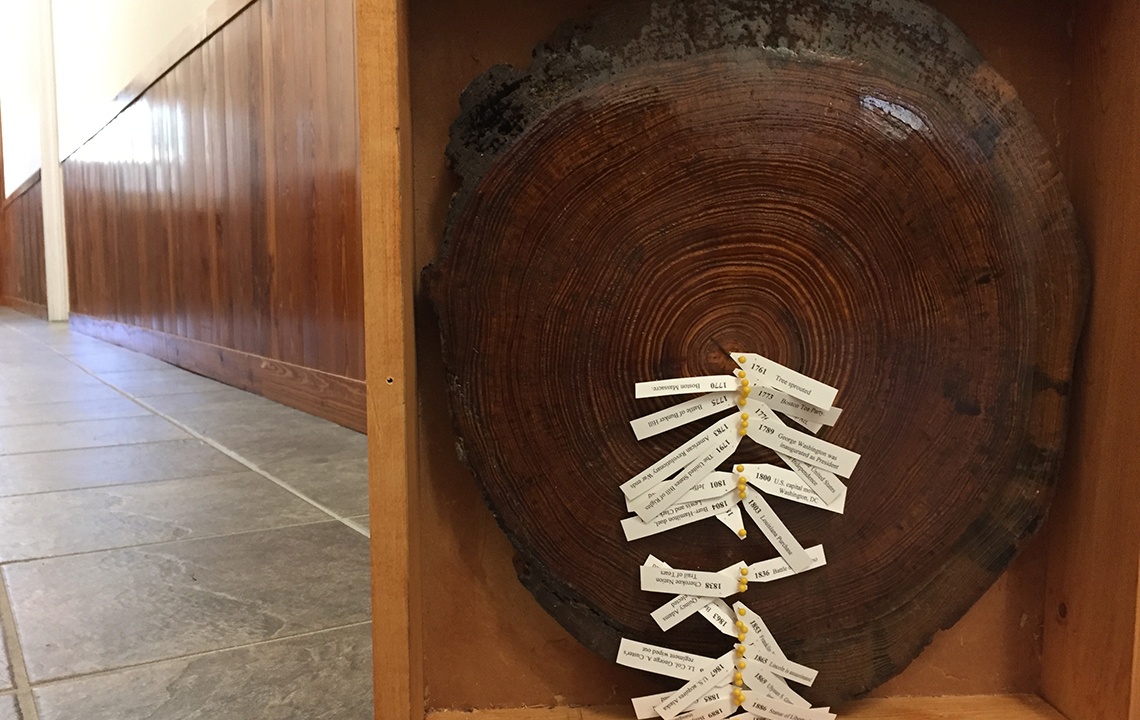 How a forester created wooden decor from a piece of history

Posted by Nancy Dorman-Hickson on February 2, 2017

When Billy Lipthrott found the remains of a pre-Christopher Columbus era tree, he had to preserve it and put the rustic wood on display. He explains how you, too, can use wood harvested from your land in your home.

When Billy Lipthrott was growing up in Lake City, Florida, he was the “right hand man” for his father, a general contractor.

“A lot of the houses were built on one- or two-acre lots out in the country,” Lipthrott recalls. “Sometimes people took trees from their land and used the wood in their houses.”

Such architectural features added character. “There’s just a lot you can do with wood to make your house a little bit unique. We had one guy who took a red oak and made a bar out of it,” he recalls. Now a resource land manager in Hastings, Florida, for Rayonier, Rethink:Rural's parent company, Lipthrott applied the same concept with river wood in his office.

“Back before there were automobiles, logs were moved by the river system,” he says. “They would tie a bunch of logs together – they could be two miles long – and that’s how they transported the logs down the river.” 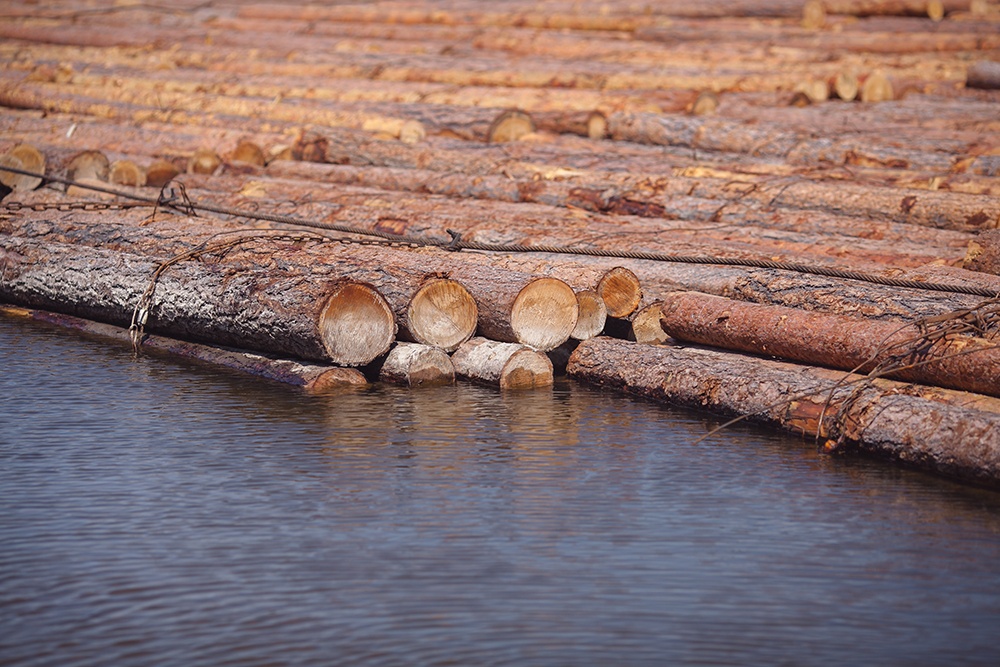 In addition to transportation, water was used to store and increase the life of the cut wood, keeping it from rotting. “If it was in the water, it lasted twice as long as wood sitting on the ground,” Lipthrott says. Even today, water is still used at contemporary sawmills to extend the vitality of cut wood. Sawmills were often situated near lakes, like the 1800s steam-driven facility that was located on the Rayonier property where Lipthrott’s office is in Hastings. “They would cut down the trees, move them with horses, and store the logs in the lake,” he explains about those olden days.

Back then, most of the logs, 80 to 90 percent, floated, but more dense ones sometimes sank to the bottom. 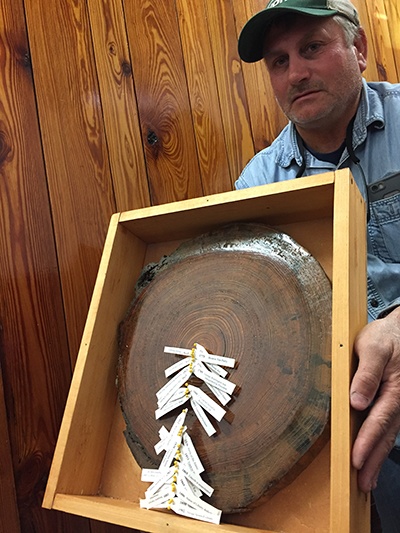 “Any time you had a sawmill built on a lake or a river, there were always sunken logs there,” Lipthrott says.

When a drought struck in Hastings a few years back, the sunken logs were recovered. Water had beautifully preserved rare, old-growth longleaf heartwood pine logs. As shown in the background of the photo of Lipthrott shown here, the wood features a tight grain and a rich patina and red coloring from the trees' resin. Lipthrott holds a "cookie," which is a cutout showing one of the trees' rings. The forester calculated the dates the tree was alive and marked important moments in history the tree was alive for. The tree, dating back to the 1760s, was a baby next to the oldest tree they found:

“Of the logs we pulled out of the lake, we figured the tree was alive in 1451,” says Lipthrott. “I counted the rings. The tree was standing when Christopher Columbus came.”

Whether trees are pulled from a river or harvested from an owner’s property, the same steps prepare them to be used as walls or flooring: sawing, drying, and planing or tongue-and-grooving. “People can put it in their house and have a story about the wood that they are always going to want to talk about,” he says. “It’s just something a little different than what your neighbor has. It’s not something you can buy at a home supply store.”

To find people who can prepare the wood, he advises starting with your local sawmill operators.  “They will be able to point you in the right direction,” he says. As for costs, “If you can find the right person, they may do a deal with you where you can split the wood with them and they will process it for you.”

There are two ways to dry the wood: stack it and let it air dry, a four- to six-month process, or kiln dry it in about 12 hours. (You can learn more about the process in our article, Putting Wood to Work.)

“After you get it dried, then you take it to a wood processor who can tongue and groove it and plane it and make it ‘slick,’” Lipthrott says. “Most folks like to use 5/8-inch wood on the wall and 3/4-inch on the floor.”

The wood recovered was used as wainscoting in the 3,000-square-foot office building Lipthrott works in (as well as the wooden piece in the photo below).

“We actually polyurethaned it so it looks natural,” he says. He’s proud of the results. “Most offices are just drywall and white paint. Since Rayonier is a timber company, this old-growth pine wainscoting fits what we’re doing. Plus,” he adds, “you always have a story to tell about it.”

All photos except logs on river by Luke Kelleher. 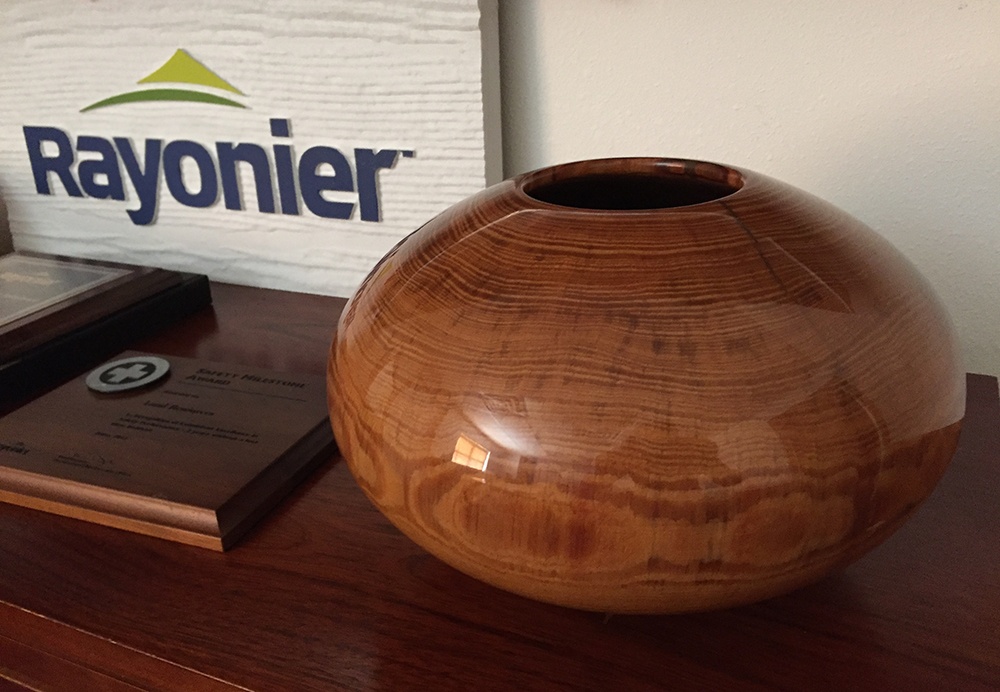