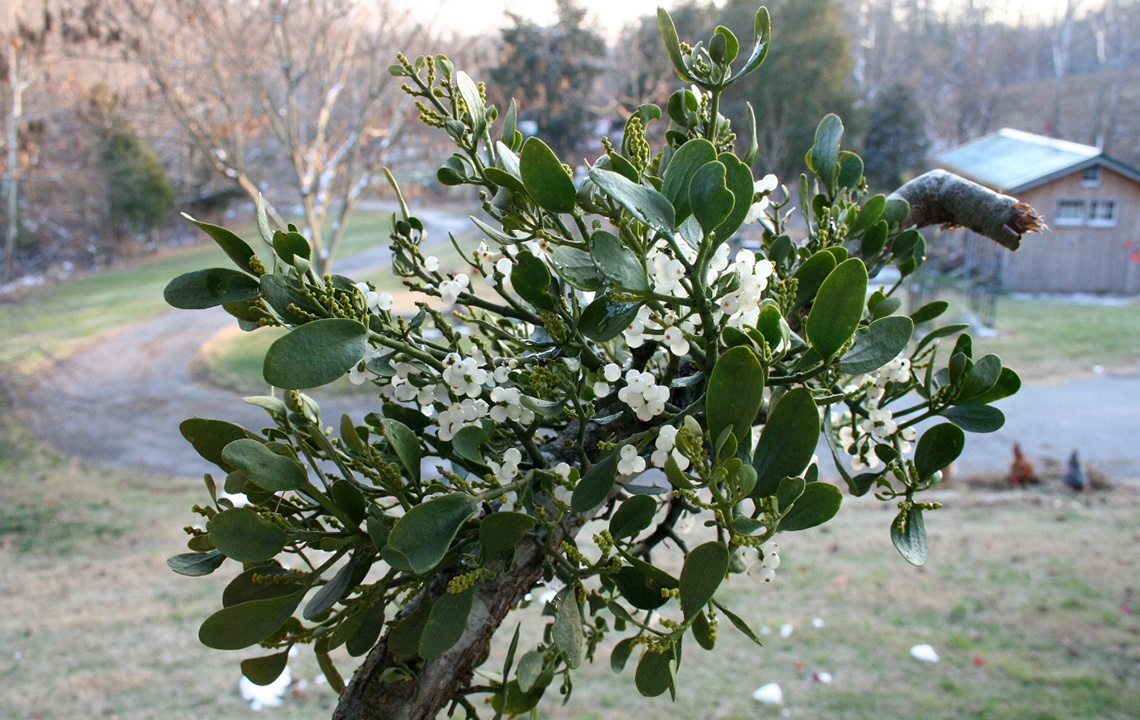 The history of mistletoe goes far beyond Christmas and kissing. There are many more uses for the plant then just a holiday decoration .

Sitting under the mistletoe

All the sleepy dancers gone,

Just one candle burning on,

Some one came, and kissed me there.

The other day I had a rare few hours off and away from our Kentucky ridge farm (especially now that our sons are driving themselves to school together), only to return to the sight of our beloved “mistletoe tree” lying across the upper pasture across the road. Devastated, I called my husband. He had asked Elijah, our fence builder, to take a few trees down along the side of the Long Field to create more pasture, including a black walnut by the gate. As many country people do, the two men had bartered one service for the other: more field area cleared and fixed fencing in parts (from fighting bulls and errant hay bales) in exchange for board timber and firewood. Unfortunately it was the wrong black walnut and the wrong gate. I will forever mourn this tree but could hardly be upset at Elijah for the misunderstanding. What’s done is done. (And perhaps I better understand now why my grandfather rarely liked to leave his farm: something unfortunate might happen while you are away.) 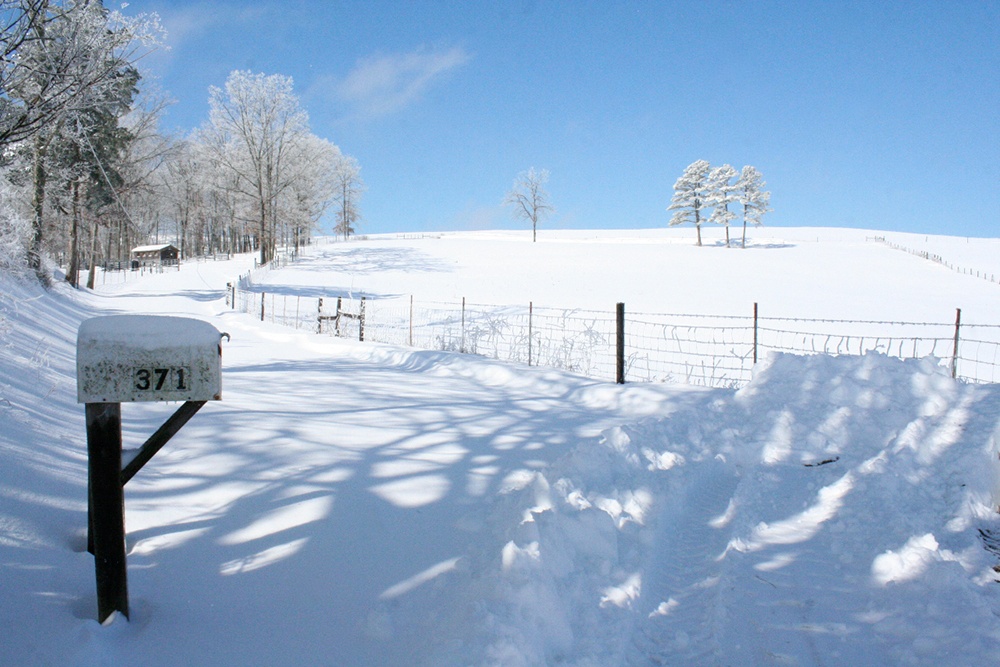 The author's "mistletoe tree," in the center of this photo, served as a host to the parisitic plant until it was mistakenly cut down.

Every autumn when the tree lost its leaves, the tips of its branches would reveal green cylinders of mistletoe, a plant that depends on the life of its host tree to survive. I grew up knowing that mistletoe is a plant associated with Christmas and that it had much symbolism and mysticism around it. I had always thought of it in relation to English manor halls and boar’s head feasts and Christmas carols, or the small seasonal sprigs you could buy with their fake white plastic “berries.” Imagine my delight to find it growing on our Kentucky farm after we moved here almost a decade ago! On one of our first Christmases here, my husband and boys presented me with a large ball of mistletoe cut from a tree they had felled for firewood. It remains one of my most favorite gifts—now in memory and photographs. 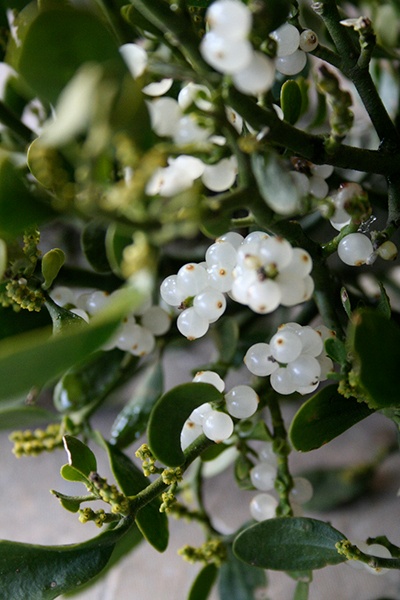 Mistletoe is associated with extensive lore, mythology, and symbolism dating back to the ancient Greeks and Druids who associated it with powerful, mystical, and sacred properties. On the night of the winter solstice, the chief Druid would cut mistletoe from the oak. Then it would be cut with a golden sickle on the sixth night of the new moon after the solstice. The branches would be captured by a cloth so as not to touch the ground and were then divided into many sprigs and shared with the assembled to be hung over doorways as protection against the elements and evils.

The plant was considered a heal-all for illness, to ensure fertility (hence its association with kissing), and as a talisman against witchcraft. It is now used in certain European countries as a prescribed cancer medicine and for other ailments (but it has not been approved by the FDA in the United States). Warning! The plant is toxic so do not dabble in its medicinal use without proper knowledge.

Of course, its best association is to hang in a threshold underneath which a kiss can be shared. In ancient times, hanging a ball of mistletoe was a sign of friendship and goodwill. The Anglo Saxons associated kissing underneath it as a connection to Freya, the goddess of love, beauty, and fertility. It was often interpreted as a promise to marry as well as an indicator of a long life and much happiness. In France the custom was held for New Year’s Day: “Au gui l’An neuf” is translated as “Mistletoe for the New Year.” One reason that you never see mistletoe in church decorations is that it has always been associated with pagan traditions and practices—I suspect it is also just not as readily available to most florists in bulk.

That is certainly not the case here in the southern United States. Dependent upon a mild, but not tropical, climate, the mistletoe thrives in Kentucky on its primarily deciduous hardwoods. There is only one species of mistletoe in the eastern United States, Phoradendron serotinum, with at least three recognized subspecies and at least 1,000 different species of this parasitic plant found worldwide.

Its wonderful Anglo-Saxon name derives from the translation of ‘a twig with bird droppings’ because it was thought to be propagated by bird poop. Our Kentucky variant is a hemi-parasite in that it draws moisture and associated nutrients from its host tree but can produce, or photosynthesize, its own food. It has been found on more than 200 species of trees but in Kentucky it is especially found on the walnut, elm and black cherry.

Each white berry will develop root-like structures that pierce the branch of the host tree and begin to form a lump. The waxen leaves prevent water loss and are about 1” long and ½” wide. The perennial plant can become a ball of 2-3 feet at maturity with white berries on the female plants when they are between 3-5 years of age (so a rarer site to find). Mistletoe is a dioecious species that has male and female potential on different plants.

The plants tend to grow high off the ground so be careful in cutting some for your Christmas season! (One Appalachian custom was to literally shoot the mistletoe down with a gun.) The sprigs are wonderful tied to gifts or mailed to an unsuspecting friend—and hung over a threshold in your home.

After the tree was sadly and mistakenly felled this week my husband reminded me that I have been saying, each year, that I wanted to send balls of mistletoe to friends and family around the country. This year I shall have my chance. Who said there is never a silver lining to a sad situation? 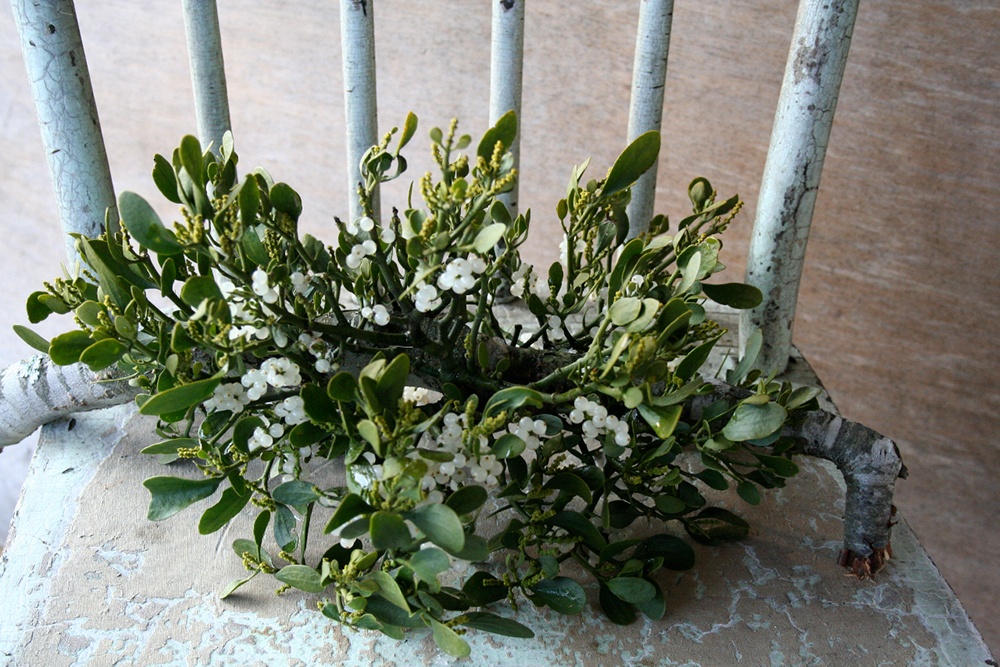 All photography by Catherine Pond.