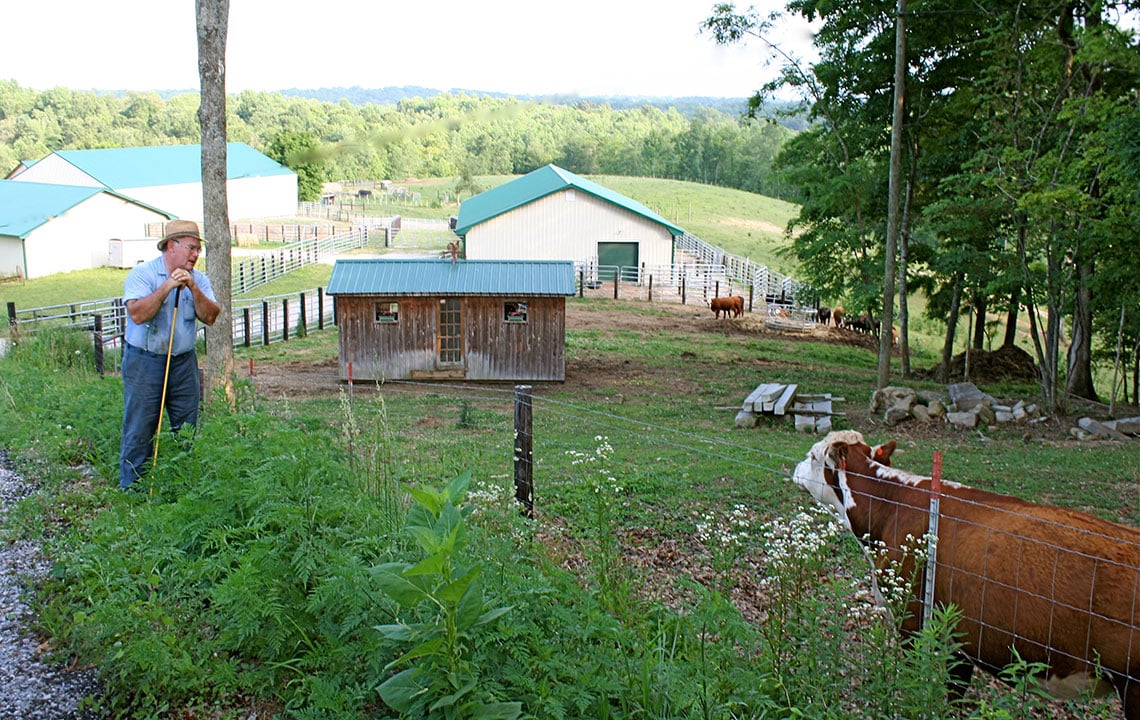 Starting a farm at midlife: The 1000-mile journey

Since we moved nearly 1000 miles from New England to Kentucky eight years ago, where we knew absolutely no one, native folks often ask us, “Why Kentucky?” The immediate answer is that we wanted better farmland, we wanted warmer winters, we wanted our boys to grow up on a farm and experience the life my husband and I had had in varying degrees, but never in a complete sense of self-sustenance.

How to start a farm at midlife

The longer answer comes when you look at my typical day. This morning was hectic before school (and I’m still not exactly a morning person if that is any indication). There are chores, I have to drive our two boys eighteen miles to town—an hour round-trip if I don’t stop for errands—and I see my husband out the door to whatever he needs to do. I often remind him, “I married you for life, but not for lunch!” Our local county seat has almost every amenity but it also has about as much traffic as I can stand on any given day. In other words, it's worth the drive and distance. 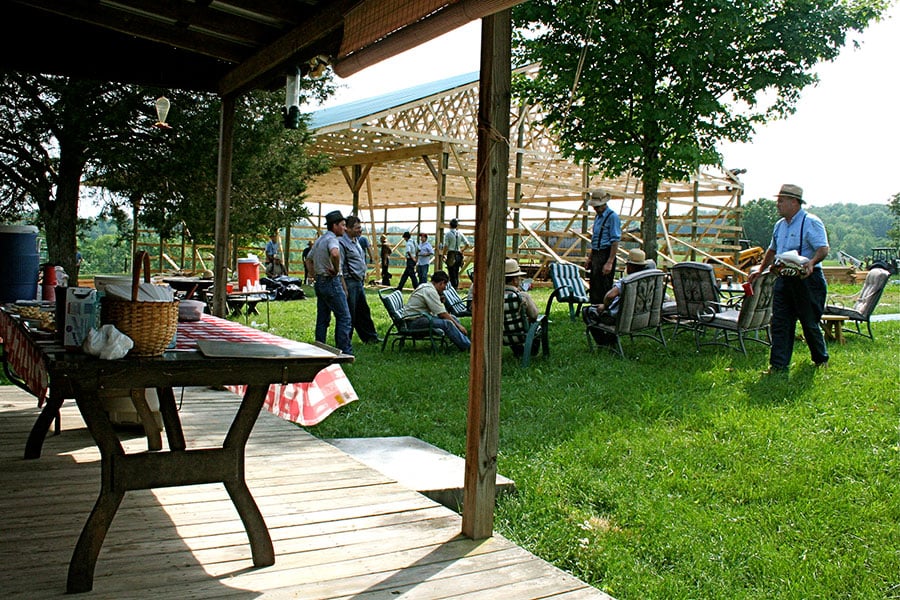 After the Pond family bought their Kentucky farm they befriended many in the nearby Old Order Mennonite community. Here is a "frolic" they organized for a shed-raising: the men helped Temple and the boys with the building and many women helped Catherine provide the food.

Then I came home to the peace and quiet of our ridge: to a chorus of gobbling turkeys, barn swallows, mockingbirds, bob whites, mourning doves, the lowing of our cattle, and the chortle of roosters. And I was so grateful. My life is not perfect, but all we have to do is look to nature, to our farm, and to the blessing of each other for clarification. These much-needed quiet weekdays to myself to write and putter around the place are also a kind of balm. And these are the other reasons why we moved to the country to have a farm: peace, quiet, the care and tending of animals and the land, and our own schedules.

We live in the southern edge of the Kentucky knobs where a series of finger-like ridges provide large tracts of open and rolling farmland. I marvel that our ridge is just about the same land area in length and width as the island of Manhattan, and yet with only about 200 people on it, give or take, and three country churches. We are minutes from the Cumberland Parkway that can take us anywhere we need to go, when we can get away. 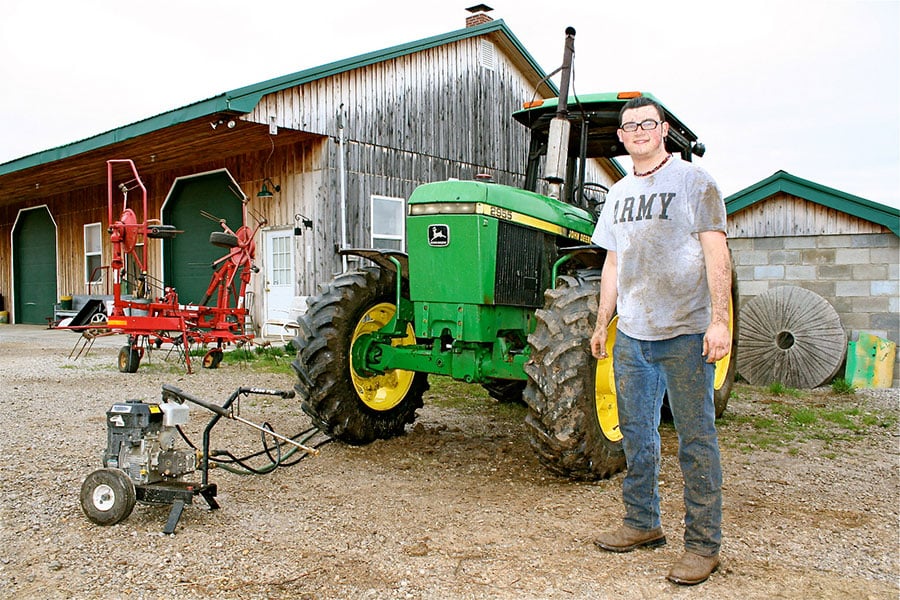 The Ponds’ son Henry is a natural mechanic who does much of the field work and tractor repair when he’s not busy playing basketball or going to school.

I grew up in northeastern Ohio and spent summers on my grandparents’ farm in New Hampshire. They moved there from New Jersey in 1946, just after World War II, and for some of the same reasons that we moved here: more land, a quieter pace, “land spreading out so far and wide.” They were much like Oliver and Lisa Douglas of Green Acres: city and suburban-raised, well-educated and traveled, but green about farming. They learned from other farmers as their six children grew up and learned alongside them. They raised geese, produce, and greenhouse flowers. 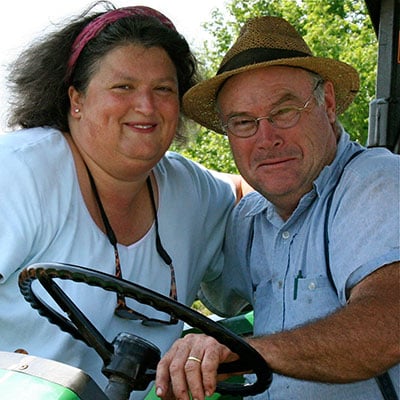 In 1974, when my mother, brothers and I moved to her childhood farm year round, I was 11 when I met my future husband, who was working at a neighboring dairy farm and haying my grandparents’ fields. Twenty-two years later, I married him. And thirty-four years later we moved to Kentucky.

We have three children—a daughter, 27, who lives and works out west—and two boys, 17 and 15, who share fieldwork, cattle chores and cow-whispering duties. I am the chief cook, gardener, and general factotum (and hope to one day get some tractor lessons. I could also clean the house more).

We once lived in a large Federal home in the middle of a picture-perfect Colonial village, filled with the stuff of generations. If it sounds a bit like a fairy tale, it rather was, at least in appearance. In 2008, right before the market crashed, we sold our home to a displaced broker from Bear Stearns. There have been times where I've dreamed of the house but now I consider Kentucky home—it provides us with everything that we didn’t have, the things you can’t define or quantify, or even buy.

So when looking for our farm we looked westward as many pioneers surely did back when “Kentucke” was uncut wilderness with dense forest and creek bottoms and rivers flanked by palisades. It is the very place Daniel Boone “esteemed a second paradise” and moved his own family.

“Nothing in this world can take the place of persistence,” wrote our 30th president and Vermont farmer Calvin Coolidge. Settlers in Kentucky were persistent by necessity. Farmers are persistent, too: they plod through despite weather, occasional crop failure, rising prices, and fluctuating markets. But the rewards are great. 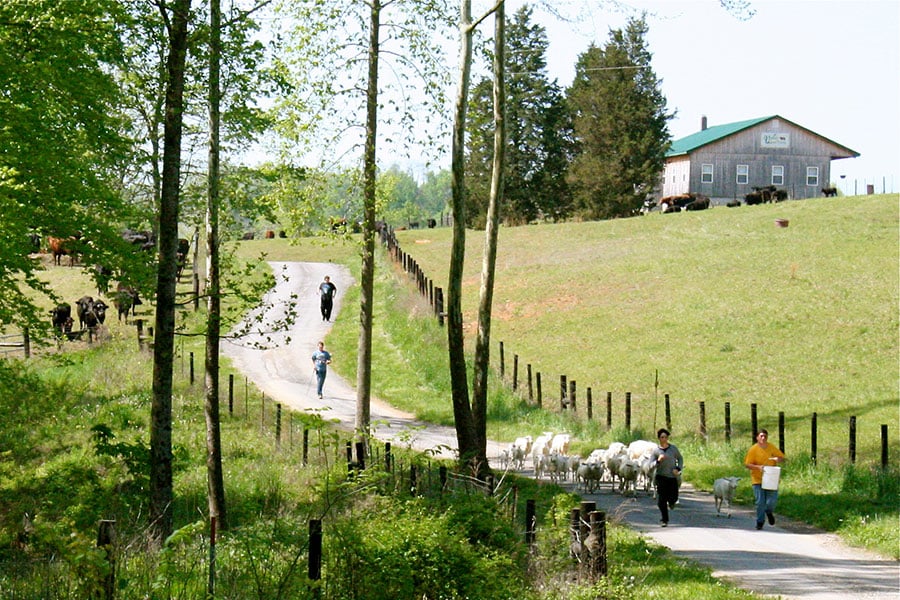 The Ponds’ son Eli, shown in the front with the bucket, is the resident “sheep whisperer” on the farm. Here he leads a "sheep run" to another pasture with several of his friends in tow.

Starting over at midlife—I was 45 when we moved here—and starting a farm are both worthwhile challenges. You learn to adapt, make due, and rely on an abundance of pantries and freezers. We eat most of our own food or produce grown by our local Old Order Mennonite friends. We know, in a pinch like those who farmed during the Great Depression, that we can at least feed ourselves. And this is the life that we've always wanted. I recall a journal entry that I wrote back in the mid-80s when I lived and worked in Boston: “Someday I want to live on a farm, marry Temple, have children, and write.” It’s all happened.

I wouldn't trade our farm, with its funky old cabin-turned-cottage and quiet hills for anything. We have neighbors down the road and we are happy to see them when we do. My New Hampshire grandfather, when he left his farm, even if only for a day, couldn’t wait to return—like a horse to the barn. Now, some forty years later, I get that. We’ve gone to where we're supposed to be—and I’ve re-rooted, strong and deep. 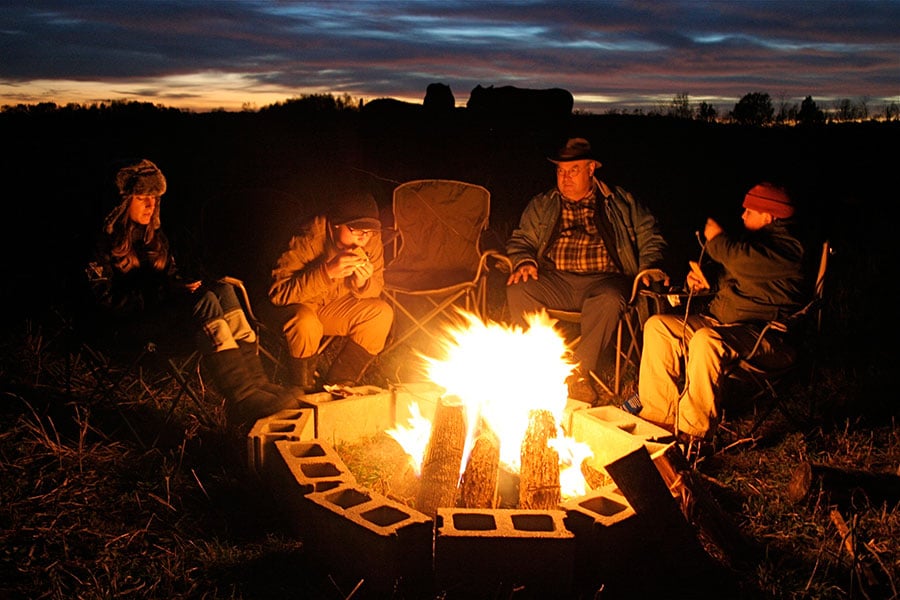 The author took this picture of her family when they celebrated her 50th birthday on top of the knob at their farm in October 2012. From left, daughter Addie (visiting from Colorado), son Henry, husband Temple, and son Eli. Always curious, cows gathered near to see what was happening.

Have you been dreaming of changing your life the way the Pond family did? Raydient Places + Properties can help you fins the land that could change everything, with an inventory of rural land throughout the South. Take a look at available properties at RaydientPlaces.com.

All photos by Catherine Pond.

END_OF_DOCUMENT_TOKEN_TO_BE_REPLACED

Meet Lisa Marin---A Model of Self-Sufficiency Posted by L. Woodrow Ross We often hear words, but we don’t really listen. I am often guilty of not being a good listener. My wife, Margaret, had often mentioned the Facebook...
END_OF_DOCUMENT_TOKEN_TO_BE_REPLACED