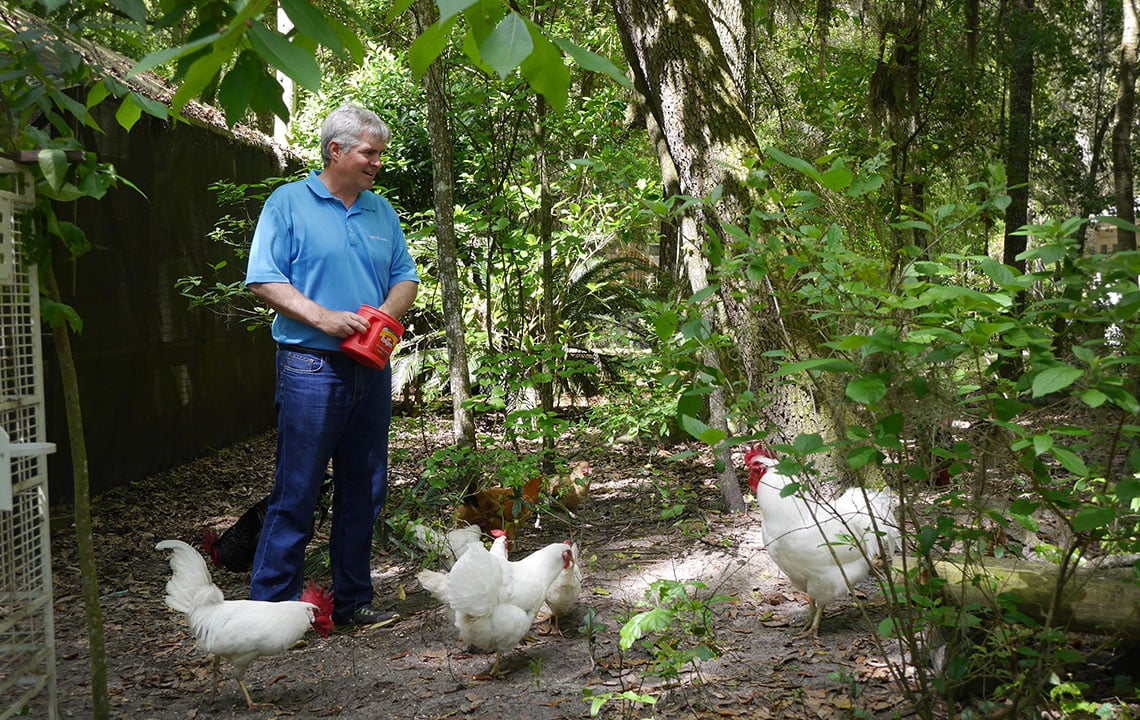 The rural land that keeps on giving

Troy James is a man who likes to reinvent himself, and his rural land helps him do it, from raising chicken to paintball to composing music.

Troy James has a flock of chickens to thank for a real estate investment that keeps on paying off.

“I had the choice of a small place on the beach or a 9-acre rural property, which were roughly the same price,” he said. 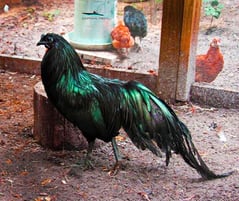 The difference? He couldn’t fulfill his lifelong dream of owning chickens on the beach property.

“I chose the rural one of course. They both went up in value -- a lot,” Troy said. “But the beach place is now fighting erosion, so I made a very wise choice.”

His land provided the perfect place for him to breed, nurture and sell prized chickens. Over 150 of them can be found strutting around the property at any given time.

That’s just the beginning of how the land has allowed Troy, an IT consultant and fishing charter captain by day, to chase his dreams.

The property, found on a quiet dirt road in a rural area west of St. Augustine, Florida, consists of a mix of dry forest land, wetlands, and a stunning view of Trout Creek. Troy found the spot when he was out for a drive with his wife. It wasn’t even for sale, but they researched who owned the property, called them up, and made them an offer.

Troy built his first chicken coop at the same time he built his family’s house. Several additional coops have gone up since then.

“We eat some of the eggs, sell other eggs, and I sell the chickens online. People come from as far away as Georgia and the Gulf to buy these special breeds,” Troy said while he checked on a group of baby chicks in one of the pens.

In another pen, two hens were sitting on eggs.

And in the yard, the alpha male of the bunch -- a large, black rooster -- paced back and forth, waiting for feeding time.

Troy’s dog, Boomer, followed his owner, waiting for his chance to eat, too. When Troy tossed an egg his way, the dog caught it, broke the shell with his teeth, and licked out the egg inside. Clearly, this wasn’t his first time.

Then Troy and Boomer started walking down a long wooden dock.

Gesturing to the woods around him, he added, “You can see that these wetlands have been cleared out some. That’s because the goats I used to keep ate a lot of the vegetation.” 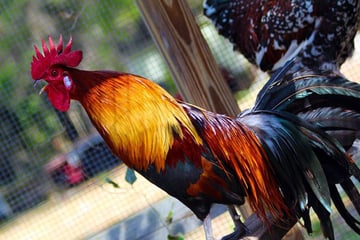 Goats, too? Yep. But Troy sold them a while back and used the money to buy his charter fishing boat. The large boat easily fits under a carport on the property, one more reason Troy’s glad he passed on the tiny beach lot.


Land that makes and saves money

But that’s not even close to the most surprising business he was able to launch thanks to his land. At one point, when paintball was just becoming popular, he turned his land into a paintball course on the weekends.

When a party was scheduled to arrive, he would cover the house in tarps and let the paintball battles ensue.

“I made between $2,000 and $10,000 in a single weekend when I offered paintball here,” Troy recalled. “But it got old eventually, and I decided to pursue other interests.”

One interest, producing music, was easy to do in the solitude of a house out in the country. Troy set up his drum set in his living room and turned it into a recording studio,

where he continues to produce music.

It appears his ideas will just keep coming. His next plan is to begin tending honeybees. He’s also considering raising fish.

Beyond the money-making opportunities, Troy sees his land as a money-saver.

“I like having my own well system and septic. I don’t have to deal with city systems,” he said. “Our only utility bill is electric, and that’s usually $100 a month.” 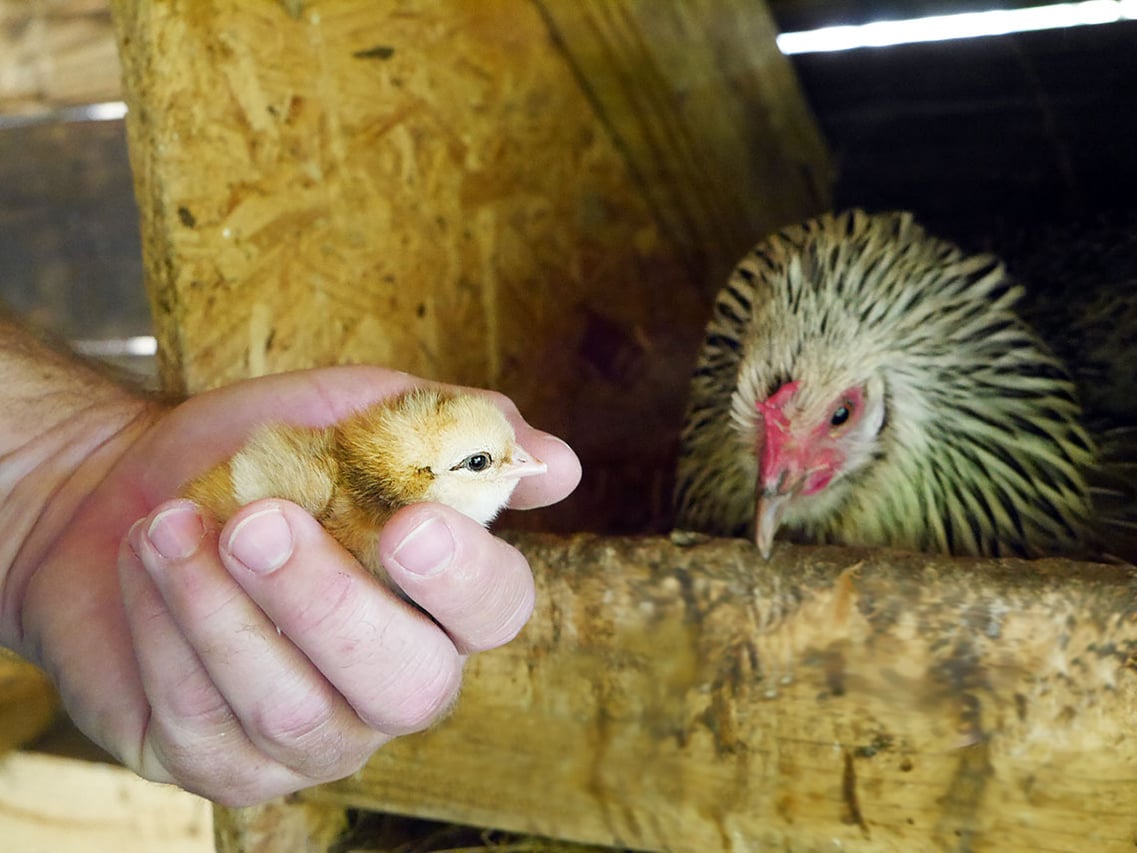 Troy holds a newborn baby chick next to its mother minutes after it hatches.

The land isn’t just about making and saving money, though. With multiple hammocks dotting the property, 100-year-old oaks draped in Spanish moss, and a stunning view of the creek at the end of Troy’s long dock, it’s also about peace, nature, and relaxing.

As Troy walked toward his “secret spot” on the waterfront, there was a sudden splash in the water. Without turning his head to look, he said, “That’s a leopard frog. You can tell by the sound it makes when it hits the water.”

Those sounds of nature - lost in busier parts of the world - are part of what makes home special to Troy, his wife and their 15-year-old daughter.

“I think it’s healthier out here,” Troy said. “We have the fresh air, fresh eggs, peacefulness, nature. There are things you can do out here that you can’t do anywhere else.”

Do you want to look for land to give you the kind of freedom Troy enjoys? Take a look at rural properties for sale in Northeast Florida and other parts of the South at raydientplaces.com .

END_OF_DOCUMENT_TOKEN_TO_BE_REPLACED

Meet Lisa Marin---A Model of Self-Sufficiency Posted by L. Woodrow Ross We often hear words, but we don’t really listen. I am often guilty of not being a good listener. My wife, Margaret, had often mentioned the Facebook...
END_OF_DOCUMENT_TOKEN_TO_BE_REPLACED